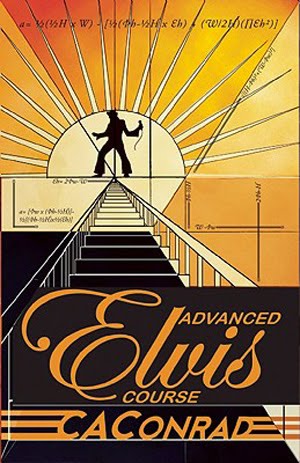 Artist of the AMAZING cover is
by Goodloe Byron
Posted by poet CAConrad at 4:34 AM


2 MORE SAMPLE PAGES FROM THE BOOK:

One of my favorite vices is littering in wealthy neighborhoods. For days I save litter for the million dollar houses and condominiums: candy wrappers, wads of dirty tissues, used condoms, mayonnaise jars nearly licked clean, expired Atlantic City casino coupons.

I kiss my picture of Elvis and promise Him I will NEVER litter in the neighborhoods of the poor! NEVER!

I can hear Him answer, "LET THE RICH MAN KNOW HIS TRUE WORTH! LET HIM SEE THE CONDITION OF HIS SOUL ON THE STREETS OUTSIDE HIS HOME!"

I promise Elvis, I will, I will!

Onboard the Lisa Marie jet for a tour of what Elvis called his "Graceland in the Sky," I couldn't help but think of my uncle who wanted to be a pilot for United Airlines. He always dreamt of flying one of those big jets from Cleveland to Hawaii everyday, ever since he saw Elvis in Blue Hawaii. My uncle wound up driving a bus for Greyhound after failing pilot school. I used to imagine him driving a bus load of passengers from Cleveland to San Diego, pulling over at the coast, gazing out over the Pacific, picturing Hawaii thousands of miles away, beaches full of airline pilots reclining with piña coladas and cheeseburgers. San Diego is about as close to Hawaii a Greyhound bus could ever hope to get. My uncle died a sick, bitter man, having to drive from Cleveland to San Diego every week, the bus never lifting off the ground, no pretty stewardesses pacing up and down aisles handing out peanuts and pillows. He would have loved the Lisa Marie jet. "Wow, this sure is classy," he'd have said, sitting down in the pilot's seat. "You know, those airline pilots all think they're such hot shit! I could've flown one of these things, no problem! Those fucking pilots are nothing more than glorified bus drivers if you ask me! Who the fuck do they think they’re kidding!? Sons of bitches!"


OH homophobic Elvis fans I give you THIS!
(I was receiving a fair amount of HATE mail from Elvis fans for the queer content of the book and would send them this link FOR MY AMUSEMENT)
Posted by poet CAConrad at 8:58 PM